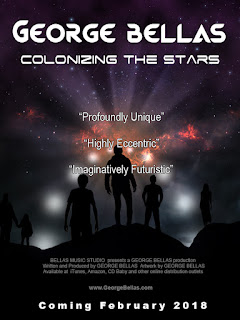 The music is visionary and very deep with dense polyphonic textures weaving in and out over a myriad of outlandish meters and rhythms. The melodic content is very lyrical and flowing in which all instruments at some point execute.

There is only a single guitar used throughout the entire album, meaning absolutely no double
tracked guitars were recorded. Using a single guitar was an effort to leave room on the soundstage for the choirs and other instruments and also to situate a dedicated location in the stereo and frequency spectrum. A full range of choirs were used, including a boys choir, girls choir, sopranos, altos, tenors, and basses. The style of writing is exceptionally unique and in a class of its own.

The organization of the album is in a symphony sonata cycle with three cycles containing three movements each. Each three movement cycle is in the format of Movement 1 - Fast, Movement 2 -Slow, Movement 3 - Fastest. Each cycle utilizes modified forms of Sonata Allegro, Minuet and Trio, and Rondo.

The album was mastered with the entire dynamic range left intact. No limiting was used during mastering. Turn it up! 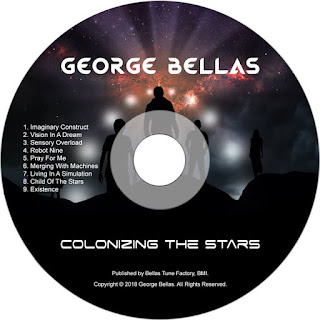 1. Imaginary Construc
2. Vision in a Dream
3. Sensory Overload
4. Robot Nine
5. Pray for Me
6. Merging with Machines
7. Living in a Simulation
8. Child of the Stars
9. Existence
Downloads are available as MP3-320 files. ABOUT THIS ALBUM

George Bellas is a guitarist and composer who was brought to the scene by Mike Varney in the late 1990’s on Shrapnel Records. Bellas currently has a catalogue of over 20 albums that he has worked on with others and as a solo artist. He has played and recorded with an extensive roster of high-caliber players, including: Marco Minnemann, UFO (MoggWay), Dean Castronova, Virgil Donati, Ansley Dunbar, Trent Gardener (Magellan), Vitalij Kuprij (Trans Siberian Orchestra), Ring of Fire, John West, Uli Jon Roth, and numerous others.

George’s music exhibits an abundance of classical and ultra-modern composition elements and techniques that include; counterpoint; Baroque, Classical and Romantic era harmony; extensive odd-meters and complex rhythms; a plethora of post 20th century melodic, harmonic and rhythmic techniques; lyrical melodies; large and small classical forms; and intense guitar solos. “To me, it is the profoundness of the music and how emotionally charged the playing within it is that means most.” - G.B.