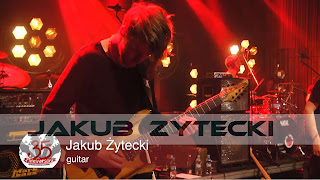 DISPERSE inject fresh momentum into the progressive genre. On their second full-length "Living Mirrors" this young Polish band demonstrates that they have learned the essential grammar of their musical language by heart. There are moments of hovering fluidity taken from the void left by PINK FLOYD. You will find the complexities of cascading syncopated breaks, odd-time signatures and all these tools of trade that DREAM THEATER brought close to perfection. And most of all, there is a strong undercurrent of CYNIC’s playful approach in elegantly fusing hard Metal sounds with just any style they deem appropriate ranging from Jazz to electronic elements.

DISPERSE were founded in the Polish city of Przeworsk in December 2007 by guitarist Jakub Żytecki, vocalist / keyboarder Rafał Biernacki and Marcin Kicyk on bass. During the next six month the group composed four songs, which formed the basis of their first demo release "Promo 2008".

We had a great pleasure to participate in this very special evening that happened to be nicely audio-visually captured too! Big shout out to Mayoness team and all the people involved for making this night so awesome!