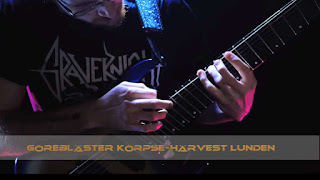 Guitar playthrough by Goreblaster Korpse-harvest Lunden of the song "A Prison of Ice" from our record "Vampira: Disciple of Chaos."

Filmed by Anthony Lusk-Simone at Zenbeast Studios in Leominster, MA. Guitar was recorded using an Avid Eleven Rack processor and a Focusrite Scarlett 18i20 audio interface during the playthrough on top of an instrumental mix of the studio track. All tone changes and effects were triggered by MIDI commands in real time from our Pro Tools session we run during full-band live performances.

Learn all about The Beast of Nod and The Land of Nod at thebeastofnod.com

Our album "Vampira: Disciple of Chaos" is available for digital download at thebeastofnod.bandcamp.com

Physical copies can be purchased at thebeastofnod.com/store

Filmed by Anthony Lusk-Simone at Zenbeast studios in Leominster, MA. The guitar audio was recorded during the playthrough through an Avid Eleven Rack processor on top of an instrumental mix of the song. All effects (flanger, delay, gain automation) were MIDI-controlled in real time during the playthrough.