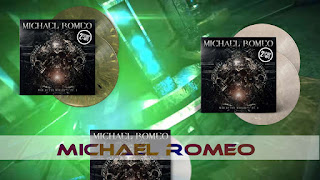 Official lyric video for Black from Michael Romeo's first official solo release 'War Of The Worlds / Pt. 1' which is due to be released on July 29th 2018.

The adventurous 'War Of The Worlds / Pt. 1' is due out July 27th on Music Theories Recordings

Limited edition Camo Green vinyl (300 copies).
Max. 2 per order. If you order more than 2, we will cancel and refund your order.
Internationally acclaimed guitar hero Michael Romeo has announced the release of his eagerly anticipated first official solo album, War of the Worlds / Pt. 1, on July 27th thru Music Theories Recordings / Mascot Label Group. The wildly ambitious 10-song disc sees the founder, chief songwriter and prime mover of the progressive titans Symphony X furthering his reputation as one of the world's preeminent axe slingers and composers of adventurous, multi-faceted orchestral metal.

Symphony X fans have been waiting two decades for an honest to goodness Michael Romeo solo album (not counting his 1994 demo recording, The Dark Chapter, which was released in several countries), and the arrival of War of the Worlds / Pt. 1 will be no doubt be cause for celebration.