Steve Vai: What I Like & Dislike About Strats & Les Paul Guitars! 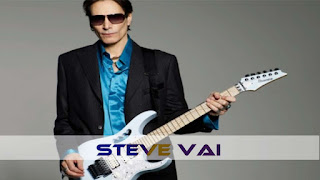 In a recent interview, guitar virtuoso Steve Vai discussed what he likes and dislikes about stratocasters and les paul guitars. but he also talked about the formation of his first signature Ibanez JEM guitar!

"When I was young, I loved Strats, because they had a whammy bar.

"But i didn't like the way they sounded! They weren't rock 'n' roll to me - they weren't Led Zeppelin or Black Sabbath.

"I loved Les Pauls. I liked the way they sounded, but I couldn't sit with them, I couldn't play them very well.

"So working with Frank [Zappa] - Frank would get an idea for something and he would just do it. He didn't make any excuses and he wasn't afraid to do all sorts of things to a guitar.

"I was so young, I was 18 when I started working for him, and then 21 when I joined the band and started touring - so I was very impressionable.

"I learned that if you wanted to do something you just do it. So I was thinking, 'I would like to build a guitar.'

"Telecasters were like an icepick in the forehead for me to play. It was so un-rock 'n' roll to me at the time. Little did I know lot of the Led Zeppelin stuff was recorded on a Tele.

"So I just started thinking what would I like to see in a guitar, and I went to this little guitar shop in Hollywood. At the time I was joining Dave Roth's band, and I had this beat up green Charvel. I called it the Grean Meenie.

"I call them mixture between a Strat and a Les Paul. Basically a Strat-style body with a whammy bar, with a humbucker pickup. And that was Edward [Van Halen]. He introduced that.

"I said, 'That's smart. You don't have to have that single-coil pickup when you're trying to rock out.' So I knew I wanted that. But there was a lot of other things that I wanted.

"I went to this little guitar builder, and the first thing I did was I drew a body. I thought that Strats looked really nice, but they weren't that sexy. They had rounded edges, they were a little utilitarian.

"I wanted something a little more angular and sexy. I think this is very sexy. *holding his signature guitar* And I thought, 'I can't understand why these people are making guitars and they're giving you these frets but you can't reach them.'

"So I thought that was a good idea to scallop them up top, and it was totally cut away. Because I thought I'm just doing this for me. Who's gonna want this?

"Now one of the elements that was really absorbed into conventional contemporary guitars was the three pickup configuration, the way that it's wired. At the time I didn't know that was new, it was just something I wanted.

"But these are humbuckers, and they have more fatter and warmer sound than single coils. But one of the great things about Stratocaster that I loved is they have single coils. And when you put two single coils at once, it's a completely different tone.

"The Hendrixy kinda thing. And you couldn't get that with conventional humbuckers at the time. So I came up with this idea to split the coil, so when I'm in this position I get full on humbucker, and in this middle position it turns these two pickups on but it splits the coil so it's two single coils. So you can get that sort of Straty sound.

"That was unique at the time. I only needed one volume control and one tone control. And I moved the volume knob down a little because on most Strats the knobs seem to get in the way.

"So I just put it here, and it was never a problem. Unless you swing it around your head. [laughs] But the real thing was... The whammy bar. I love the whammy bar and the Floyd Rose popular at the time, and it was new. And that was a godsend. Well, it was hell until they put fine tuners on it.

Steve Vai: What I Like & Dislike About Strats & Les Paul Guitars!