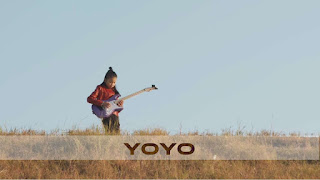 The shy little girl yoyo, who picked up an electric guitar, became like a person. Her eyes were sharp and her actions were crisp. She could shoot up to 280 beats in a minute, squeezing countless players and making guitar fans around the world boiling. Yoyo is the youngest cover person since the launch of the American Guitar Magazine's "Guitar Player" and the first Asian. Ordinarily Yoyo is a shy girl. But once picking up the electric guitar, she becomes a different person. With sharpe eyes and nimble fingering of 280 beats per minute, she wins over numerous good hands and exhilarates guitar fans worldwide. She's also the youngest person And the first Asian to be on the cover of Guitar Player, America's top guitar magazine.