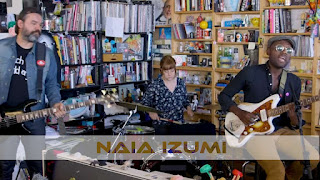 May 14, 2018 | Bob Boilen -- I am so proud of our 2018 Tiny Desk Contest winner, Naia Izumi. The band he brought and the songs they played for this winning Tiny Desk Concert made us all even prouder.

Naia was chosen after we reviewed nearly 5,000 video entries. And the talent that came to us through all those submissions was astonishing. Naia Izumi won us over with his mind-boggling and unique style of guitar playing — a combination of tapping on the fingerboards and soul-filled whammy bar-note bending. And his multi-octave singing range blended so eloquently with his guitar stylings.

"Soft Spoken," the song he submitted, felt singular and unparalleled to our panel of judges which included past Tiny Desk contest winner Tarriona "Tank" Ball, Tiny Desk alum Sylvan Esso and Gaby Moreno, along with NPR family members Talia Schlanger (WXPN), Russ Borris (WFUV), Toki Wright (The Current) and the All Songs Considered team of Robin Hilton and myself. It's a song, as I hear it, that speaks to the power inherent in the gentle and quieter voices that are often drowned out by the outspoken and boisterous ones. Its title was originally "Soft Spoken Woman" and, as we later learned, Naia had identified as a woman for nearly seven years. More recently, as he said in an interview with Washingtonian Magazine, "I'm not into that anymore because I just want to relax with biology and be comfortable with what I have."

Naia is often a one-man band playing on the streets with a drum machine. But for his Tiny Desk Concert he brought bassist Adam Matijasevic and drummer Kynwyn Sterling. He'd met Kynwyn after submitting one of his songs to a math rock Facebook group. And that's the thing: Naia's music draws from so many spheres of sound. There's that punctual, rhythmic, mathematical pulse to what he does, but there's also a fluid, almost African Kalimba sound in there as well. They're two sounds I wouldn't often think of as coexisting.

We're about to go out on the road with Naia Izumi to 10 cities. We'll be joined by some of the other Contest entrants that captured our attention and they'll share the bill alongside Naia. And though there is only one Contest winner, we discovered so many other great talents that we hope to feature in the future.

Remember that the spirit of the Contest is intended to bring out the best in you, to gather with friends and to create. Thank you for being a part of something so filled with magic. It was an honor to watch what you created.