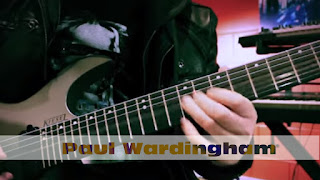 MP3s/CDs/TABS/MERCH at http://store.paulwardingham.com
Thanks for your support!
BANDCAMP: https://paulwardingham1.bandcamp.com
Also available on iTunes, Amazon, Spotify and Apple Music

The master of futuristic metal shred, Paul Wardingham is back with his 4th completely self-produced instrumental cyber metal epic, Electromancer! A sequel to Paul's 2nd album, he returns to the world he created for The Human Affliction, 150 years in the future!

Inspired by his favourite sci-fi movies from the 80s and 90s, Wardingham pushes the boundaries of his pioneering instrumental style even further with Electromancer. Featuring a more retro-futuristic, synthwave influenced, electro-metal sound than on previous albums.

Electromancer features stunning cover artwork by Light The Torch (ex-Devil You Know) and former All Shall Perish guitarist Francesco Artusato.

As well as appealing to guitar fans of players like Andy James, Jeff Loomis and bands like Scar Symmetry and Fear Factory, Electromancer may also appeal to fans of game soundtracks like Doom and Killer Instinct.

“I really wanted to get back to a style that I was doing a few years before writing Assimilate Regenerate. More focused on melody and riffs than on lots of guitar solos. Spiritual Machines is more metal, very song orientatedThere’s an energy to this album that’s very different to my previous works”