Greg Koch: crank it up and see how good he is 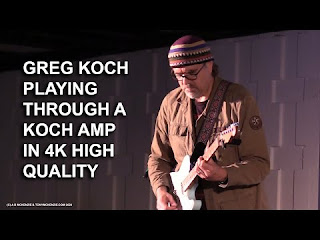 Greg Koch is one of those guys you see all the time on YouTube, but of course he gets around too all over the place playing equipment and demonstrating what he does so well. Here Greg plays a number of styles like jazz rock, blues, blues rock, classic rock, country & more. Now Greg is rated as one of the top 10 unsung heroes of guitar players in the world and I can believe that. He also has a sense of humour when playing that mutates in to familiar little flurries such as 'Heart breaker' from Led Zeppelin (did you hear it?) and many other similar things.

Does Greg play Koch amps?
So what's that guitar he used?
Is he really that good at guitar playing?
Where was this guitar player recorded?
How many band members are there?

No chatting in this video, just loud, and proud guitar playing from one of the great guitarists out there. If you have never seen Greg in action be prepared and don't judge him by one style of music - Greg can do it all as he shows in this 4 K high resolution video.

I'm not a tall guy... just 5' 6" or so but Greg towered over me, I reached his armpit! So if Greg asks you to do something... then obey... its the only way to be. He also towers well above most guitarists skill out there and he is a man of great ability for sure. Watch him here and his fret-board antics. If you notice them (you will) I'm sure it will bring a smile over your face. I captured this in 2019 but its as current today as it always has been.
Greg Koch using a Koch amp playing many styles of guitar in 4K : crank it up and see how good he is

Greg Koch using a Koch amp playing many styles of guitar in 4K : crank it up and see how good he is