When asked if "Tone is in the hands." 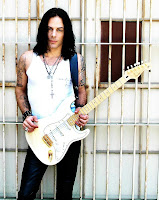 The real core of what you’re doing of course comes out of your hands, but so many times you can plug through an amp that’s just god-awful. You gotta roll with it. You gotta do what the amp is capable of doing because if you try to do everything and the amp is only capable of some things, you’re not going to be able to do what you gotta do.