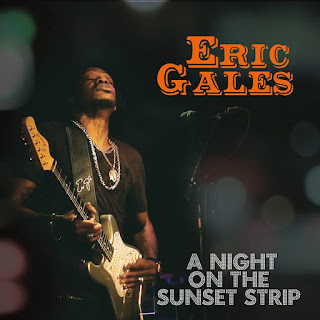 Los Angeles, CA - Blues rock phenom Eric Gales set Hollywood’s Sunset Strip on fire last year with his six-string pyrotechnics at an explosive concert performance in the legendary Viper Room. Audiences were treated to a truly spectacular concert as Gales let loose on a string of Southern fried soulful blues favorites from his back catalog including “Block The Sun” and “The Open Road” PLUS tracks from his most recent album Good For Sumthin’ including a smokin’ hot cover of The Stones’s “Miss You” featuring a special guest appearance by Good For Sumthin’ producer Raphael Saadiq (John Legend, The Roots) on bass! Now, this concert experience is coming to home theaters everywhere as a special CD/DVD combo package called A Night On The Sunset Strip to be released this July 8, courtesy of Cleopatra Blues. This one will melt your eyes and your ears!

Eric Gales 'A Night on the Sunset Strip' (Official Trailer)


Eric Gales came to national prominence in 1991 when he won Guitar World’s Best New Talent award. A brilliantly dynamic performer, Gales started releasing solo albums and wowing audiences in 2001 with a style and sound that frequently reminds listeners of the late great Jimi Hendrix, whose upside down Fender Strat playing Gales emulates. No wonder then that Gales was asked to headline the extremely popular Experience Hendrix Tour joining a line-up that includes a true who’s who of guitar masters including Eric Johnson and Zakk Wylde both of whom make guest appearances on Good For Sumthin’. Gales also recently supported Grammy award winner Lauryn Hill for her appearance on The Tonight Show With Jimmy Fallon promoting the Nina Simone tribute album Nina Revisited. Look for more releases from this extraordinary performer on Cleopatra Records!