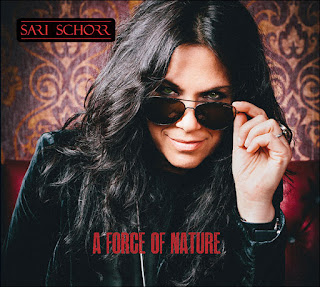 SARI SCHORR & THE ENGINE ROOM – “A FORCE OF NATURE”

Manhaton Records is pleased to announce the debut album “A Force of Nature” from one of the most exciting Blues rock singers, SARI SCHORR. Released in the UK and Europe on September 2, 2016, the album is produced by the legendary Mike Vernon whose credits include Fleetwood Mac, John Mayall & the Blues Breakers, David Bowie, Savoy Brown, Chicken Shack, Eric Clapton, Peter Green, Christine McVie and Ten Years After. Click on the following link to access the official press page, album artwork and hi res photos - www.noblepr.co.uk/Press_Releases/manhatonrecords/sari-schorr.htm.

In January 2015, Mike received a Keeping the Blues Alive award at the prestigious International Blues Challenge in Memphis, Tennessee. The award was not the only highlight of the weekend for Mike. The second highlight occurred when Mike witnessed the performance of one of the most amazing female blues singers he’d seen in years – SARI SCHORR. Mike was so knocked out, he came out of semi-retirement to produce her new album. Already a consummate songwriter in her own right, with tracks on major labels, Sari has written or co-written almost all the songs on the debut album.

New York-based Sari Schorr initially gained prominence throughout the blues world after several years of touring the US and Europe with Blues legend, Joe Louis Walker and renowned guitarist, Popa Chubby. Schorr was recently inducted into the New York Blues Hall of Fame.

The album delivers hard-driving Blues-Rock, influenced by the late '60s British Blues movement. Sari (who trained as an opera singer) mixes Blues, Rock, and Soul with concrete melodies and poetic lyrics to striking effect. Watch and/or embed a short film about Sari from THIS LINK.

"My songs are rooted in the blues and honouring that long tradition is important to me,” reflects Sari. “My song-writing draws heavily on contrasting melodic hooks with aching harmonies. I spend a lot of time working over and rewriting my lyrics. I rely heavily on imagery and enjoy using double-entendres that are entertaining to those who catch them. My influences are many and various and include Son House, Howlin’ Wolf, Muddy Waters, Lead Belly, Bessie Smith, Etta James, Ella Fitzgerald, Freddie King, Robert Johnson, B.B. King, Peter Green, Robert Plant, Martha Velez and Bob Dylan.” 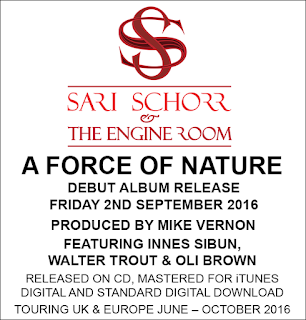