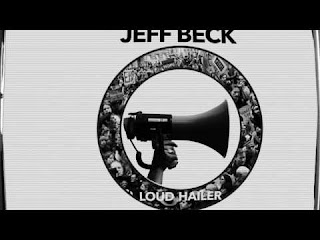 This Summer, Beck Will Also Release His New Book BECK01, Tour With
Buddy Guy, And Lead A Special Career-Spanning Concert At The Hollywood Bowl

LOS ANGELES – Jeff Beck has premiered a lyric video for “Live In The Dark,” the first single from his upcoming album LOUD HAILER.

On LOUD HAILER, Beck combines fluid fretwork with topical lyrics to make a powerful statement about everything from the love of power, to the power of love. LOUD HAILER will be available on Atco Records, an imprint of Rhino Entertainment, on July 15 on CD ($18.98), LP ($21.98), and digitally.

A few days after the album’s release, Beck will launch a summer tour of the U.S. with blues legend Buddy Guy. And on August 10, Beck will make his Hollywood Bowl debut for a very special, career-spanning concert that celebrates 50 years of ‘dynamic music making’ with special guests including Steven Tyler.

Over the course of Beck’s illustrious 50-year career, the trailblazing guitarist has earned many accolades. He has twice been inducted into the Rock & Roll Hall of Fame. First, as a member of the Yardbirds in 1992 and then again, as a solo artist, in 2009. Rolling Stone ranked him as one of the “100 Greatest Guitarists of All Time” and he has earned a total of eight Grammy Awards during his long career. In addition, Beck has been a guest performer at scores of sessions with everyone from Stevie Wonder and Buddy Guy to Tina Turner and Mick Jagger. Throughout his career, Beck routinely makes the fantastically difficult sound effortless.


Jeff Beck Summer Tour w/Buddy Guy (*except where noted below):