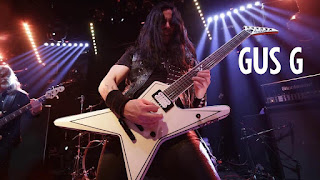 Gus played the biggest stages worldwide, between 2009 - 2017 as a member of Ozzy Osbourne’s band, and played on Ozzy’s album Scream. He’s also the founder of Firewind, releasing 8 LPs and touring around the world with the band, and has also released 3 solo LPs

An incredibly grounded person, Gus talks candidly about playing with Ozzy (and a funny Ozzy story), why he prefers living in Greece, why he left Berklee, his top 3 musical experiences, his signature Jackson guitar & Blackstar amp, Tony Iommi, John Lennon, being mindful of others, most difficult thing he’s had to do, GREAT stuff: