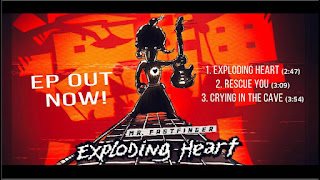 New music out now! It's a digital only release. Listen at Spotify, should be found on iTunes and all services as well… Playthrough video coming out soon!

This release is for the anniversary of the ten year old debut album. Celebrate with me! The power solo anthem: Exploding Heart started when i hear orchestral stems of the tune Big Trummors. The core of the tune is in the rhythm and harmony of B. Trummors but it’s completely different. Rescue You is based on a tune that was supposed to be on Exploding Guitar album. After a ten year break from the tune i renew it’s harmony, wrote new melodies, recorded guitars and synths. Really cool time capsule track! Crying in the Cave was mastered along the Exploding Guitar album, but I knew that the album was too long already and left it out. Here’s finally this fantasy tune out officially!

Mika Tyyskä – Guitars and just about everything
Sampo Tiittanen – Double upright bass on track 1.
Thomas Törnroos Drums on tracks 1. and 2.
Lasse Rantanen – Bass on tracks 2. and 3.