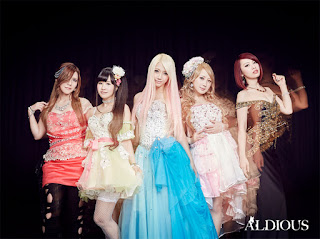 
Thank you for always supporting Aldious.
Today, we have important information.

We would like to report that Aldious's guitarist Toki has been married.
And because it turns out that I'm pregnant now, it is a very disappointing news, but the
performance that Toki can participate in this tour is the thing that will be up to Shibuya TSUTAYA O-EAST performance on Sunday, June 9 I apologize.
I told the members and Toki himself from the office to stay still without going up to the stage because of pregnancy, but being in
stable period, permission from multiple doctors, and strong of Toki himself It was
decided this time by wanting to stand on stage until Tokyo performance on June 9 by hope .
The guest guitarists who will participate in the performances until November will be announced on Wednesday, May 22 as soon as they are adjusted.
In addition, also in the performance scheduled to participate in Toki until June 9, we think about the case of the person's physical condition etc. and do not overdo it
, so we will wait for the guest guitarist as much as possible and follow the live. It will be
Depending on your health condition, you may not be participating in the performances before June 9th, so it would be appreciated if you could approve.

All Aldious fans, and guest vocalists SAKI and R! N, who came to the tour in the wake of the
band, I was very sorry to be puzzled by the circumstances of the band.

It is undecided about the return to the stage of Toki in the future, but
the activity as a member of Aldious will be continued after this , such as updating of SNS and radio appearance, etc. to the extent that the person is not unreasonable.

To all the fans
who support us and to the related parties who always support Aldious,

I would
like to report to you that I will marry you and that you are pregnant now. You
I
am sorry that I was surprised, anxious, worried, and anxious to everyone who is always in the middle of Aldious national tour and it is a sudden announcement and is always cheering.

I
hope you can explain in my words .

With regard to pregnancy,
we are now in a stable period and will be giving birth this fall.
The other party is a general person who has always been with you.

About this year's national tour
It is in the midst of the national tour that continues until November 2nd, and it has become difficult for me to appear in all the performances.

Aldious's live is so intense and loud that the
members and the office
have
said many times, " Please do not stand on the stage with the safety of the mother and child first ."

but,
I really want to play the guitar in front of everyone, I have a strong request of my own, and I made a diagnosis and judgment by multiple specialists, and
refrain from unreasonable performance
, Shibuya of June 9 (Sunday) I would like to perform until TSUTAYA O-EAST performance.
(My sudden change in physical condition may cause my appearance to be cancelled.)
It is a judgment that I think that a big move and a schedule in a row will be a burden.

As for the subsequent live schedule, it will
be a performance that will receive guest guitarists.
(Now, I am in the process of making adjustments) When I made

this report a member, I was prepared to say that it might be over, but
all the members gave a congratulatory voice and a voice of congratulation from the heart.
Guest vocals SAKI and R! N, who are on tour together, also blessed me in the same way. We had you talk with

the
members about the future activities of Aldious of Toki and asked that you want to continue the activities as Aldious after childbirth. Of course I felt the same way.
For a while, things that I can do are limited, but
I hope that I can do my best as a member of members.
And with the goal of standing on stage again, I would like to make more efforts than ever.

Everyone who always supports me,
For those who have known us in the wake of guest vocals SAKI and R! N, to
those concerned, we have been
making such announcements, reports that have been delayed, and acting selfishly We sincerely apologize from the bottom of our minds and the fact that it will cause great inconvenience.
Aldious will continue to advance from now on, so thank you for your continued support.
Toki


■ About Aldious Tour 2019 “Evoke”
This live tour, the Tokyo tour of Aldious Tour 2019 “Evoke” will be the last appearance before Toki's suspension.
The tour will continue with guest and guitarists following the Tokyo performances.
Therefore, although the cancellation response is not usually carried out, as a response from the office to Toki fans, we
are considering the refund of a special ticket from the office as a window.
We are currently considering how to respond, so please wait for a presentation.
We will decide the details, etc. and will announce on Wednesday, May 22.
Also, I would like to announce the guest guitarist's presentation as well.

We apologize once again for your great concern and inconvenience.
Thank you very much.
VAA