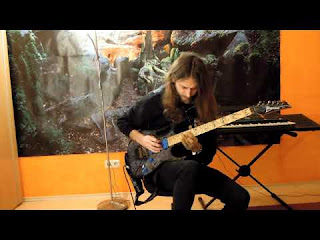 Greg Howe has been one of my top 3 favorite guitar players since my formative years, I used to listen and transcribe his 90's solo albums and the stuff he did with Richie Kotzen and with Vitalij Kuprij for countless hours in the past. This solo cover is a modest tribute to one of the true greats, it's not perfect, but that stuff is HARD.


Official video clip for the song "Knight Rider" off my upcoming third solo album "Path Of The Hero", which will be released on March 11 in Japan and South Korea through King Records and on worldwide on March 20 through my own label Shredquarter records.

►You can pre-order my new album and/or the tab book for it from my bandcamp merch store: https://christianmuenzner.bandcamp.com/album/path-of-the-hero-2