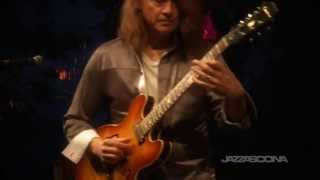 Together with the talented organist Ricky Peterson (John Mayer, David Sanborn, Bonnie Raitt, Brian Culbertson) as well as the great Harvey Mason on drums (Bob James, The Brecker Brothers, Lee Ritenour, Herbie Hancock's Headhunters, George Benson)and Brian Alan on bass (Greg Adams, Sara Bareilles, Rich Robinson), Robben Ford's new and amazing band, makes its debut at JazzAscona. Robben Ford is one of the greatest guitar players alive, master of fusion, jazz and blues style. A five-time Grammy nominee, he has played with artists as greats as Joni Mitchell, Jimmy Witherspoon, Miles Davis, George Harrison, Bonnie Raitt, Bob Dylan, John Mayall, Greg Allman and John Scofield. His career as a professional guitarist began in 1969, when the Charles Ford Blues Band (formed by Robben and his brothers Mark and Patrick) was chosen to open a concert of Charlie Musselwhite. In 1970, Ford joined the jazz fusion band LA Express, which was chosen as opening act for the George Harrison world tour in 1974. Beside his solo career, which began with his first album Discovering the Blues (1972) and Schizophonic (1976), Robben published The Inside Story with the famous fusion band The Yellowjackets, of which he was one of the founding members. These last two works have been awarded with a gold record in 1980. In 1982, Ford was invited to play in the album of the rock band Kiss Creatures of The Night, and in 1986 he received the world consecration being selected as the tour guitarist of Miles Davis. With the solo album Talk to Your Daughter (1988) Robben got a gold record in 1989, the year in which he joyned Philippe Saisse, Marcus Miller and JT Lewis in The Sunday Night Band of the famous American TV show "Sunday Night". In the Nineties he returned to his blues roots with the albums Handful of Blues, Blues Connotation, and Tiger Walk. Ford was named one of the "Top 100 guitarists of the twentieth century" by the american magazine "Musician".

Video Realised by the students of CISA http://www.cisaonline.ch/