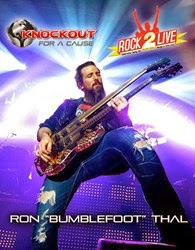 Scottsdale, AZ (PRWEB) September 06, 2013
Knockout Live, the leader in global IPTV Networks announced today, via Knockout For A Cause, the assignment of popular guitarists Ron “Bumblefoot” Thal as the 2013-214 Chairperson.

The talented musician, known for his lead guitarist position with the mega group Guns-N-Roses, accepted the position as the 2013-14 Chairperson for the Rock2Live Music Series. The gifted performer is firmly dedicated to helping schools adapt the program this fall as the main Ambassador to the Cause.

Thal has been an advocate for the arts in schools and a well known supporter of school music programs. The performing artist and producer frequently volunteers his time to benefit schools between concerts and recordings.

The Knockout for a Cause Foundation provides schools across the country with a public service program against bullying, texting while driving and obesity. The foundation has been developing a streaming entertainment product to replace the candy bar drives in schools helping curve the use of unhealthy fundraising items that are traditionally used.

Once all schools have returned to session from summer break, the Rock2Live PSA Music Series will announce the events and schedule for this year. The Foundation is dedicated to providing alternatives to raising badly needed funds while delivering vital messages to the students, schools and supporters.