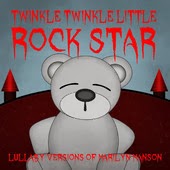 (Los Angeles, CA) The powerful and often controversial Grammy-nominated rock figure,MARILYN MANSON, gets a wicked Twinkle Twinkle Little Rock Star Lullaby treatment when the new collection is digitally released on November 26th. The assortment of songs highlights some of this nefarious and iconic band’s most memorable rock releases, such as “The Dope Show”, “The Beautiful People” and infamous Manson-twisted covers, including The Eurythmics’ “Sweet Dreams (are Made of This), Soft Cell’s “Tainted Love” and the Depeche Mode classic “Personal Jesus”.

Marilyn Manson, known for his controversial stage personality and image as the lead singer of his self-named band, is also a multi-talented musician, actor, painter, multimedia artist and former music journalist. Best known for his songs and albums released in the 1990s, such as 1996's Antichrist Superstar and 1998's Mechanical Animals, Manson’s public image earned him a reputation in the mainstream culture and media as a controversial and negative influence on youth. However, their music sings for itself; Manson has been nominated for four Grammy Awards. Manson’s latest surprising career move was recently announced; this month, he will join the cast of ABC’s Once Upon a Time - voicing the character, Shadow.

These aren’aren't novelty recordings. They are cute, they are soft but these are serious recordings. Roma Music Group, which releases Twinkle Twinkle Little Rock Star, is run by two music industry veterans who put the fidelity of these recording at the top of the priority list. Let’s face it, much like the brand name clothes you buy for your infant, this music is really for you. Whether you are raising a metal baby, rocker or hippie baby, Twinkle Twinkle Little Rock Star has your music transformed from arena anthems into nursery classics.

Twinkle Twinkle Little Rock Star. This is where the cool kids start.
http://www.ttlrs.com/