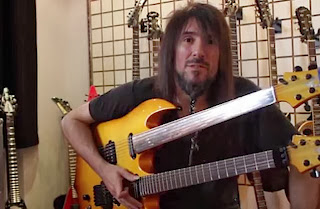 Ron "Bumblefoot" Thal and the drummer of his solo band, Dennis Leeflang, were interviewed on Chile's Radio Futuro prior to their first-ever performance in Santiago the next day.

"It's funny… Before GUNS, Dennis and I would be touring, mostly around Europe, and things were building up — I was putting out more albums and everything was growing. And then I joined that other band… [laughs]

"I didn't want to slow everything down, but every time I tried to book anything [with my solo project], it seems like the running gag was, 'Hey, if you want GUNS N' ROSES to hit the road, all you have to do is book your own tour. And they'll [GUNS N' ROSES] book one at the same exact time and you'll have to cancel yours.' And it reached a point where we got so busy with the [GUNS N' ROSES] touring that I just wasn't able to plan anything.