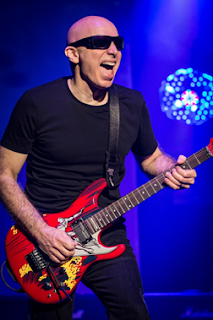 
When you watch Joe Satriani play guitar, at times you think you’re watching someone who could have invented guitar playing. – Washington Life

For more than 2 hours, he captivated the audience with his guitar genius and left everyone in awe. – Prog Report

Long before there was a “Guitar Hero” video game, Satriani defined the term. - The New Orleans Advocate

(Los Angeles, CA – April 26, 2016) Following on the footsteps of the hugely successful North American "Surfing to Shockwave" tour, Joe Satriani announces his upcoming European tour dates beginning June 18th in France. The tour will touch 11 countries in all, including Ireland, Netherlands, Belgium, Denmark, Norway, Germany, Italy, Spain and and Switzerland - in just one month of touring. A few of these stops will be G3 dates featuring Satriani joined by Steve Vai and the Aristocrats (see below for details).

The North American leg wrapped up late April in Vancouver after a full-on 2-month tour where the hard working guitarist hit 48 dates in the U.S. and Canada, many of which were sold-out in advance. The “Surfing to Shockwave” tour is in celebration of the guitar icon’s “30 Years of Mind-Bending Guitar Daredevilry,” a phrase coined in a June 2014 career-defining retrospective feature in Rolling Stone. Each night, SATRIANI spotlights music from his first solo album, “Not of this Earth” through his latest release, his 15th solo album, “Shockwave Supernova”.

During the tour, concert going fans were able to enter the “Little Kids Rock” raffle with a chance to win a signed JS 20th Anniversary Ibanez guitar. Over 2000 concert fans purchased a tix with the grand prize winners, Brian & Debbie Currier, chosen last month. On June 4th, Brian & Debbie flew to meet Joe and receive the autographed guitar. The funds raised through the raffle will enable Little Kids Rock to bring the transformational gift of music to more than 700 public school children by helping launch Modern Band music programs in schools that may otherwise be in danger of having their music programming eliminated due to budget cuts. Little Kids Rock provides professional development training to music teachers and donates all of the instruments and curriculum they need to teach their students to play the popular musical styles that they know and love on day one! Little Kids Rock is proud to support music programs across the country, and specifically in the San Francisco Bay Area, where the program was founded and currently impacts the lives of nearly 12,000 K-12 public school students in more than 100 schools.

In other live appearance news, the previously announced 2016 G4 Experience will take place at the Glen Cove Mansion on Long Island, NY, August 8-12, 2016. Now in its third year, the G4 Experience quite literally brings the Grammy Award-nominated multiplatinum guitar legend and innovator back home. SATRIANI famously grew up in the Long Island area, even cutting his teeth at venues in the surrounding neighborhoods. One of his very first students was none other than best friend and fellow native Steve Vai. That makes Glen Cove Mansion the ultimate location for the G4 Experience. Once again, SATRIANI attracted some of the instrument’s foremost talents as instructors, including Steve Vai, Eric Johnson, Alex Skolnick, Mike Keneally, and more.

For two decades, the guitar virtuoso has traveled the world, playing to sold-out crowds as both a headliner and as founder of the all-star “G3” guitar extravaganza. Satriani’s studio and live recordings have sold more than 10 million copies worldwide to date and of his many solo albums, two have gone platinum and four others wentgold, with 15 Grammy nominations between them. His side project, Chickenfoot, featuring former Van Halen front man Sammy Hagar, former bassist Michael Anthony, and Red Hot Chili Peppers’ drummer Chad Smith saw their debut album certified gold and their second studio album debuted at #9.

For more information on G4, visit: