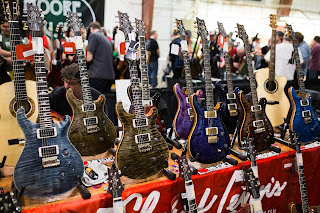 (STEVENSVILLE, MD) June 10, 2016 – “Experience PRS” 2016, the PRS Guitars’ eighth open house event, saw an impressive roster of A-list artists plus a few special guests and record attendance of guitar and music lovers from around the world. The event kicked off at the PRS shop in Stevensville, Maryland on Friday, June 3 with a VIP event for PRS Signature Club Members and special guests. The intimate crowd was treated to a private cocktail hour and exclusive preview of the Experience PRS sales floor, where more than a dozen dealers were gathered with a selection of PRS gear for sale. Included in the event’s offerings was the, now traditional, Experience PRS Limited Edition guitar: this year a Custom 24-08, which adds a new electronics configuration to PRS Guitars’ most classic model.

“We are so grateful that when we open our doors so many people come out to support PRS...manufacturing and music. We love putting this event together and getting the opportunity to rub elbows with all the fans, players, neighbors, dealers, distributors, press, and artists who attend. I heard a lot of positive comments and had a lot of great conversations over two days. It’s amazing what we have all been able to create here,” said Judy Schaefer, Marketing Manager for PRS Guitars.

The doors opened to all for the main event on Friday night and all day Saturday, June 3 and 4. After a warm welcome from Paul Reed Smith on Friday night, guests were treated to a concert on the event’s main stage with Boscoe France Band and Black Stone Cherry. On Saturday, the gates opened and guests were able to attend clinics, front the house band on the Jam Stage, check out PRS guitars, basses, acoustics, and amplifiers firsthand (including the new McCarty 594), stain curly maple to take home, win prizes at the Johns Hopkins Kimmel Cancer Center Charity Prize Wheel, tour the factory, chat with PRS staff from all areas of the shop, and enjoy all-day artist performances from Todd Bauchspies & Larry Melton, Hot Tub Limo, The Kelly Bell Band, Boscoe France Band, RDGLDGRN, and Lovebettie.

Experience PRS culminated Saturday night with a concert on the event’s main stage. John Hiatt kicked off the concert with a solo acoustic performance that weaved masterful lyrics with a passionate performance. Next, The Paul Reed Smith Band took the stage and unleashed a fun-filled set of their signature “Chesapeake Gumbo” style. No stranger to inviting artists to the stage to join the fun, Paul’s band was joined by Bernie Marsden (Whitesnake), David Grissom, Emil Werstler, Simon McBride, and Mike Scott (Prince/Justin Timberlake) for a gripping rendition of “Purple Rain.” To close the event, Vernon Reid and Living Colour gave a high-energy, hour+ long performance, closing with their epic hit “Cult of Personality.”

During the course of the two-day event, attendees heard music from more than three dozen performers, consumed more than 600 pounds of BBQ and 400 pounds of French fries, and raised more than $8,000 for the Johns Hopkins Kimmel Cancer Center.

Experience PRS is free to guitar aficionados and guests with timely registration and has seen visitors from every corner of the globe, including Canada, Australia, Brazil, Switzerland, the UK, Spain, Puerto Rico, Germany, Spain, Italy, Japan and more. Event attendance has tripled from around 700 people since the Experience PRS event debut in 2007. For an image-filled recap of this year’s event, head over to http://www.prsguitars.com/index.php/blog/post/prs_experience_2016_recap.

A photo gallery of the event is available via the following link: http://prsguitars.pixieset.com/prsexperience2016/