Steve Hunter: Camellia - hear the full version, recorded in 1980 and mixed for this release in 2016 by Steve Hunter himself. 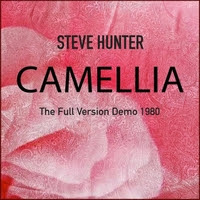 Only a small part of Steve Hunter's composition Camellia was played in the Bette Midler movie 'The Rose' by Steve and The Rose Band. Now you can hear the full version, recorded in 1980 and mixed for this release in 2016 by Steve Hunter himself.

'The Rose' movie was one of the few occasions where Steve Hunter had to audition for the job. He has fond memories of Bette Midler and making her laugh whenever he could.
He was hired to be part of 'The Rose Band' that backed the fictional character played by Bette and is very proud to have been part of the movie.

​During the filming Steve started writing a new piece of music which would eventually be called 'Camellia'. Whilst working on it during a lunch break, members of the band started joining in with him until everybody was playing it, even the horn section. Paul Rothschild the movie Producer walked in as they were playing and asked what the piece was, he loved it. That is how about eight bars (repeated) of 'Camellia' ended up being in the movie. ​

Steve went on to record the whole tune with a full band after the movie was released but until now it has never been heard. It was recorded back in 1980 so it was a challenge for Steve to mix the tracks and get them sounding as good as he could for this 2016 release and there are a few rough edges that could not be avoided.

This full version will be released just in time for Steve Hunter's 68th Birthday.
The core band on the recording were: Steve Hunter - Guitars Mark Leonard - Bass Art Wood - Drums Robby Buchanan - Keyboards. The Engineer on the session was Mike Sanders and it was recorded at Pasha Studio, Hollywood, CA.