Finding a usable band name that isn't already taken by some garage band with a Myspace in say, Turkey, is *truly* difficult beyond belief 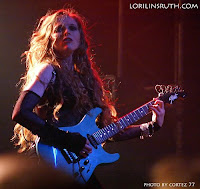 There’s not been much news from us lately, but don’t let that fool you. There has been a bustle of feverish activity going on behind the scenes here at the Electric Castle. With this update from ArjenLucassen.com we’re excited to officially announce the details of Arjen’s new project, Guilt Machine.

As Ayreon fans have come to expect from Arjen, the music of Guilt Machine ranges from dark and heavy to atmospheric and melancholic. But Guilt Machine introduces some new twists as well, particularly when it comes to the vocals. Rather than putting together an ensemble cast of vocalists from the prog, rock and metal scene, Arjen has enlisted the talents of a single alternative rock vocalist, Jasper Steverlinck.

How did Arjen get an alternative rock vocalist to switch genres and sing on a prog rock project? "In the beginning it was hard to convince Jasper to sing on this album, because he comes from a completely different musical background. He didn’t even know what prog was, but we’ve made a believer out of him! What I admire about Jasper’s voice, besides its beautiful clear timbre, is the emotion and credibility he puts into his performance and his enormous range. Because this project features just one singer I needed someone versatile enough to portray all of the different moods, and Jasper didn’t disappoint. And he’s a really nice and dedicated guy as well!"

For Guilt Machine Arjen also chose to record with a different drummer, Chris Maitland (ex Porcupine Tree). "Chris was the ideal choice this time, having both the power for the heavy sections and the subtle touch needed in the more atmospheric parts."

Rather than the explicit storyline you would expect in an Ayreon release, the songs of Guilt Machine revolve around a central theme. Instead of looking outward into a world of fantasy or science fiction, the songs look inward, exploring the destructive psychology of guilt, regret and the darkest form of secret — the secrets we hide from ourselves. "At first I asked my partner and personal manager Lori to quickly write scratch lyrics for one of the songs so I could record some guide vocals. I was so impressed by what she produced that I asked her to write the lyrics for all the songs. I was unable myself to create the type of darkly enigmatic, open-ended lyrics I wanted for these songs, my specialty being sci-fi lyrics about sinister aliens ;-) She definitely gave the songs an extra dimension with her lyrics, exorcising the demons we both had faced in the past few years. It’s also no secret that I’ve always been a big fan of her melodic guitar style, so she also plays all the guitar solos on this album."

Despite these differences, Guilt Machine still has much in common with Ayreon. The songs are mainly long, "epic" tracks that feature dynamic contrasts between softer, dreamy sections and powerful, heavy passages. There are intricate harmonies, complex rhythms, soaring melodies, and an eclectic selection of instruments — all what you’d expect from an Ayreon release.

"In my view this is my best side project so far. It comes completely from the heart, for it was written and recorded during a new inspiring phase in my life after my heavy depression. This being an entirely new project there were no expectations whatsoever, which enabled me to just let my inspiration guide me without any (outside) pressure."

Stay tuned in the coming weeks for music previews and other updates about Guilt Machine!

From all of us at ArjenLucassen.com, until next time!