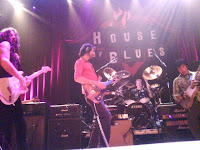 Doors opened at 7:00. First up was Richie Kotzen at 8:00. He played a 45 minute set. He sounded amazing. He was playing one of his signature teles through a Cornford amp. I think the Cornford was Ritchie’s signature amp, especially since he used all his other signature gear. I’m not that familiar with all the names of his songs, so I don’t know exactly what he played and I didn’t see a set list. He did play All Along The Watchtower.

House Of Blues: all videos


Also it looks like Mr Big are going to do OK, after selling out Budokan in ONE DAY! 15,000+ fans will see them :) An additional performance / another night of the tour might be added.
George Lynch Paul Gilbert Richie Kotzen