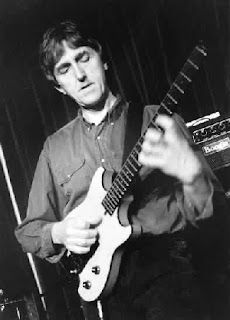 Ironically, Holdsworth never intended to play guitar at all. “I was just dabbling with it,” he recalls of his teenage years in the small town of Bradford in Yorkshire, England. “I had wanted a saxophone, I didn’t really want the guitar, but saxophones were pretty expensive in those days, relative to a cheap acoustic guitar. My uncle played guitar and when he had bought himself a new one he sold his old one to my father, who gave it to me. That’s basically how it started.”

His father, Sam, was a piano player who taught his son chords and scales. “But since he wasn’t a guitar player, he couldn’t tell me how it was supposed to be done on the guitar,” says Allan. “And I guess that’s how I developed such an unorthodox technique. I learned things from the piano and figured out on my own how to transpose those ideas onto the guitar. And I just acquired this dexterity through constant repetition and practice. I didn’t know it wasn’t supposed to be done that way, it just seemed perfectly logical to me.”

Holdsworth made a leap to warp speed after realizing that he didn’t have to pick every note. This became the basis for his incredibly fluid legato style. “One of the things I discovered early on was that if I played as many notes as possible on one string, I could get the kind of sustain that I was looking for. So I just practiced playing scales for hours and hours each day, playing four notes on each string until it flowed the way I was hearing it. And that completely opened up a new way of looking at the guitar for me. I would practice trying to play using a combination of left hand hammering-on and right hand picking in a way where I could try and make the notes that were hammered louder than the ones that were picked so that I could bury them in each other—so that you wouldn’t be able to tell which was which. And I just kept going with it until I got to a point where I tended to hear flurries of notes as a whole from beginning to end rather than hearing one note after the other.”