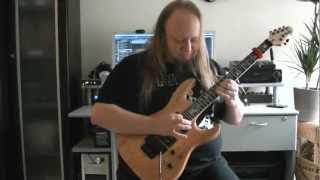 first day of the week of rehearsals for the up coming SUN CAGED show... with ARENA and HAKEN, at the Prog/Metal festival at THE ROCK TEMPLE in Ittervoort, NL.


Marcel Coenen has also indicated that he has been working on pro shot video lesson series, with multi cameras, tab etc. Marcel is an amazing technician and educator, so this series is sure to appeal to fans of quality guitar lessons. One of the reasons why Marcel was selected to play at the special Jason Becker show in Amsterdam.

Marcel Coenen illustrated true mastery of the guitar, with beautiful tone, when he performed during the 'Jason Becker's not Dead Yet' festival, at the Patronaat venue in Haarlem, The Netherlands, on November 13th, 2011.

The festival was a mind blowing, near six hour marathon of world class guitar performances.

This clip is a single camera view from audience position, but a professional camera crew was also present to record the event in full, so watch out for the official video, to be released in the near future.
About Marcel Coenen (extract from his YouTube page):
Marcel Coenen is a guitarist from The Netherlands, he currently plays in the bands Sun Caged, Stormrider, Time Machine and System Pilot and has a brilliant solo career.
He released two solo albums (Guitartalk (2003) and Colour Journey (2006)) and two DVD's (A Live Time Journey (2006) and Speed Up (Instructional DVD, 2006)). Currently Marcel is busy with his third solo album., & is also busy with his band Sun Caged, recording their third album. Marcel used to play in the band lemur Voice in the past.
About the festival (from the festival webpage):
JASON BECKER'S NOT DEAD YET IN AMSTERDAM!
The first 'Not Dead Yet' Festival happened in San Francisco March 26, 2011. Guitar heroes like Joe Satriani, Steve Hunter, Greg Howe, Steve Lukather, Richie Kotzen, Michael Lee Firkins, Jeff Watson and others honored Jason Becker that night. This was very unique and touching.
In November 2011 Jason Becker's "Not Dead Yet" Festival will be held in Amsterdam. Well respected guitar players and friends from Jason will perform during this unique special event. Proceeds from the evening go towards medical supplies for Jason as well as a trust fund to provide for his future security.
We have great guitar players like Guthrie Govan (Aristocrats), Michael Lee Firkins, Mattias IA Eklundh (Freak Kitchen), Kiko Loureiro (Angra), Andy James (Secret Mother Tongue and Lick Library teacher), Daniele Gottardo, Marco Sfogli (James LaBrie), Stephan Forte (Adagio), Joop Wolters, Marcel Coenen (Sun Caged), Timo Somers (Delain).
On the drums we have a drummer who has played like with all possible guitar players you ever heard off, on bass we have the well renowned Stuart Hamm (Satriani, Vai, G3, Frank Gambale), Barend Courbois and Franck Hermanny (Adagio), on keys Rene Kroon (Sun Caged, Barstool Philosophers).
Related links:
http://www.marcelcoenen.com/http://www.myspace.com/marcelcoenenhttp://www.youtube.com/user/mcoenenhttp://www.suncaged.com/timemachine/marcel.htmhttp://instrumentalcase.com/MarcelCoenen.aspxhttp://jasonbeckerfest.com/index.phphttp://jasonbeckerguitar.com/http://en.wikipedia.org/wiki/Jason_Becker