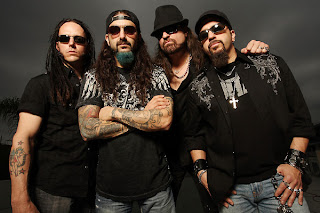 The album was recorded at Mike Orlando's studio and you guys produced it yourselves. The final product sounds really good. So, who had the most input on production of "Omerta" and where did the experience in that field come from?

R: I guess it would be me and Orlando at the beginning and Mike Portnoy came in during the recording process. I've had a lot of experience doing recordings and so has Mike Orlando so I guess that's where the recording experience comes from. Me and Orlando have technical background in engineering. And the producing experience comes from me and Mike Portnoy. It started out as a kind of home grown project, you know? We tracked all the drums and the guitars and bass at Mike Orlando's studio and we did the vocals at my place. And then of course when Mike came in he had production and recording experience as well so, it really was a group effort to really wrap it, to bring the album together. Of course his experience in the studio is more than all of ours, ha-ha!

Anthrax producer Jay Ruston mixed the album. Are you happy with the job he's done?

R: I think he did a phenomenal job. He was pleasure to work with, really, really cool guy. He understood what we needed to sound like, understood the language that we used in expressing our ideas to him and he was very instrumental in bringing the sound that we all hoped that we'd have to life and making it the part of the final product.