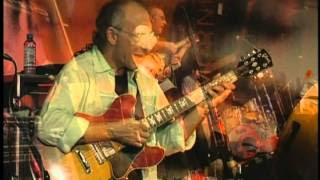 For a handful of concerts in the summer of 2001 got together two of the busiest American studio guitarist Larry Carlton and Steve Lukather. The two guitarists have known each other since the seventies, but were never appeared in public together. No wonder, for Carlton, who has played with Steely Dan, Joni Mitchell, Michael Jackson, Quincy Jones and countless other stars, it does - in his own words - about 300 sessions per year. No less busy is Lukather, Toto has been known and has next seized for Rod Stewart, Van Halen, Lionel Richie, Cheap Trick and the Pointer Sisters in the strings.
TITLE LIST:
01 The Pump |
02 Blues Force |
03 It Was Only Yesterday |
04 Red House |
05 Do not Give It Up |
06 Room 335 |
07 Put It Where You Want It