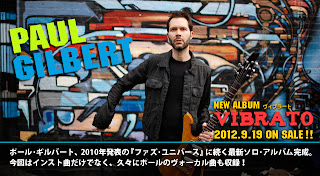 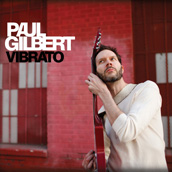 Paul Gilbert will release his latest, highly-anticipated studio album, entitled Vibrato, in Japan on September 19, 2012. Release is apparently slated for mid-October in Australia, and the rest of the world's release date is unknown.

The tracklist is as follows:

An instructional DVD will be released simultaneously. Paul will demonstrate songs from the album. The DVD is 3500 yen, as is the deluxe edition of the new CD.

Musician Lineup on the album:

Thanks to Jenn
Paul Gilbert