Alex Stornello: Angels And Demons, their album out today on music store 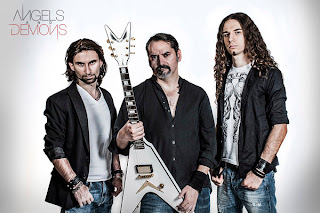 Power Fusion, the Angels And Demons' first album, out today on music store. The Alex Stornello's trio will play some songs from Power Fusion the 14 June at the Music Italy Show of Bologna.

Angels And Demons is a Power Trio that means Fusion as exploration and as a real fusion of genres and different influences. Alex Stornello is the cornerstone: internationally renowned guitarist and teacher of unquestionable experience, Alex is a musician that combines excellent technique, knowledge of harmony, improvisation skills and stylistic refinement in a sound that expands well beyond a single genre.

Alongside him on bass, Giorgio "JT" Terenziani, Rock / Metal bass player already member of Absynth Aura, Killing Touch, Mr. Pig and Maestro. Giorgio is a musician of undoubted technical skills, estimated teacher and one of the best Italian live performers. The mix between these two souls and the ability to experience are beyond any definition of genre.

The drummer Paolo Caridi complete this Power Trio and represents the engine of the band. Paolo is the drummer of Arthemis, Killing Touch and Michele Luppi Band and he has already proved itself at national level for precision and power that make him a unique and versatile drummer able to provide a solid rhythmic base and to be a good soloist using the same way: dynamics, power and rhythmic creativity.  http://www.sgrecords.it/en/news/101-angels-and-demons/248-angels-and-demons-il-loro-cd-nei-negozi
Alex Stornello