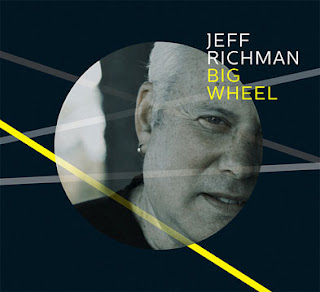 “I'm groovin' on your record, it sounds great! I think your best one.” - Oz Noy

“I’ve always love Jeff’s playing and his writing. This is a great CD. In fact, I think it’s his best so far.”
- Mike Stern

Hollywood, CA June 18, 2013 – Contemporary jazz guitarist Jeff Richman and Nefer Records announce the release of their latest CD, Big Wheel. This release is Richman’s 17th solo project and features Jeff Lorber on keyboards, Steve Gadd on drums and Jimmy Haslip on bass guitar. The new CD is also produced by Jimmy Haslip and distributed by City Hall Records. All songs are available online at iTunes, Amazon and other music websites.

Winner of Jazziz magazine’s Critic Choice in 2011, Big Wheel is Richman’s follow up consisting of 10 new tracks further expanding on what Richman has sought to achieve with every new effort. Recognized as a guitarist and composer not afraid of exploring into the unknown, Richman’s latest release is an in-depth conversation of storytelling through song. Each musician is given the opportunity to express their own account of the story and their unique voices ring through on all of the tracks.

Big Wheel opens with the funky groove, “Hell If I Know” that sets the tone and pace for the remaining nine tracks. “Happy Medium” has a great island vibe that seems to have always been hidden in Richman’s playing before but really stands out this time around. Stevie Wonder’s “That Girl” is one of two covers that appear on the release.

Alongside Richman, Lorber, Gadd, and Haslip; additional musicians appearing on the release include George Whitty, Alasn Pasqua and Dean Taba. Big Wheel is engineered by Lorber at JHL Sound, mixed by Paul Tavenner at Big City Records and mastered by Rich Breen at Dogmatic.

About Jeff Richman
Jeff Richman is a professional guitarist with a 37 year career in performance guitar, composing, arranging and recording. He has produced 17 solo albums and toured worldwide. A graduate of the Berklee College of Music in Boston, he also studied privately with Pat Metheny, Mick Goodrick and William Levitt. After graduating, he lived and performed in New York City and by 1979, moved to Los Angeles. The L.A. scene provided him the opportunity to play and record alongside the industry’s most talented artists, write and produce hundreds of library music cuts for television and participate on a multitude of film score projects. As producer, arranger and performing artist, Jeff recorded and released six CD projects paying tribute to Carlos Santana, Mahavishnu Orchestra, Steely Dan, Miles Davis, Jeff Beck and John Coltrane for the Tone Center record label. In addition to his musical career, Jeff conducts the Fusion Ensemble at Musicians Institute. www.jeffrichman.net
Jeff Richman