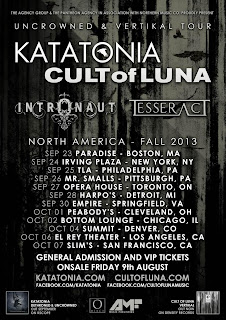 In August 2012 Katatonia released Dead End Kings, their ninth studio album. The album was the band's most successful to date and cemented the Swede's position as masters of sorrowful metal.

Dead End Kings was released on the Peaceville label, the band's home for the past 14 years. In September 2013 the band return with Dethroned and Uncrowned, their first release on Kscope, Peaceville's sister label.

Many of the ecstatic reviews the Dead End Kings received commented on the fact that the album marked another step in the band's journey towards a more progressive sound. Dethroned and Uncrowned allows them to explore these elements of the record further as they have reworked the album, creating new moods and textures while still staying truthful to the core of the songs.

The album will be available on double LP, download and as 2 disc (CD & DVD-AV) digibook set, which also features a 5.1 surround mix of the album.

Tracklist
1.The Parting
2.The One You Are Looking For Is Not Here (download:http://bit.ly/18zMCWq)
3.Hypnone
4.The Racing Heart
5.Buildings
6.Leech
7.Ambitions
8.Undo You
9.Lethean
10.First Prayer
11.Dead Letters

For more info on Dethroned & Uncrowned visit:http://www.kscopemusic.com/katatonia/
Pre-order the 2 Disc Digibook version from the Kscope Store:https://www.burningshed.com/store/ksc...


or the Double LP HERE: https://www.burningshed.com/store/ksc...