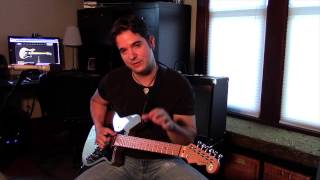 Grammy-Nominated guitar virtuoso Gil Parris, is known for his special blend of Blues, Jazz, Rock and Smooth Jazz. He has recorded and toured both as a solo artist and sideman with major artists like Dr.John, Blood, Sweat and Tears, Diane Schuur, David Mann, Billy Vera, Bobby Caldwell, Toni Braxton to name just a few. Some of Gil's career highlights include... -Major Label Recording Artist, Gil's self titled debut CD was released by RCA/BMG! "A smashing debut"(Guitar One),"An impressive beginning"(Jazziz) -Seen On NBC's THE TODAY SHOW, CBS, WPIX, RNN, BET's "Studio Jams",The YES Network, The Food Network and on the national DVD release" Masters of the Stratocaster" ! -Has had # 1 Song(s) on MUSIC CHOICE -Has A Hot Licks Artist Video & the first Truefire artist course, "Inside Out" (4 Cd-Roms) -The Gil Parris Model Signature Guitar (Reverend) was named "One of the Coolest Artist Signature Guitars of All-Time"by Guitar Player Magazine -Has acclaimed DVD out now with Paul Shaffer, Bernie Williams, Randy Brecker, David Mann...hosted by Carolyn Kepcher ! "This DVD is a perfect introduction to one of the finest players around." Vintage Guitar

"You'll be blown away by his mind-boggling blend of Jazz, Blues and Rock" Guitar Player

"Parris is an absolute monster of the guitar- lyrically, technically, sensitively. His finesse bending tones and contouring the dynamics throughout his lines truly gave the sense that he is speaking thru the notes!" Jazz Improv

"His solos are breathtaking, both in emotional expressiveness and technical command of the instrument. He's one of those players you hear and can recognize right away, no mean feat in this day in age." Vintage Guitar