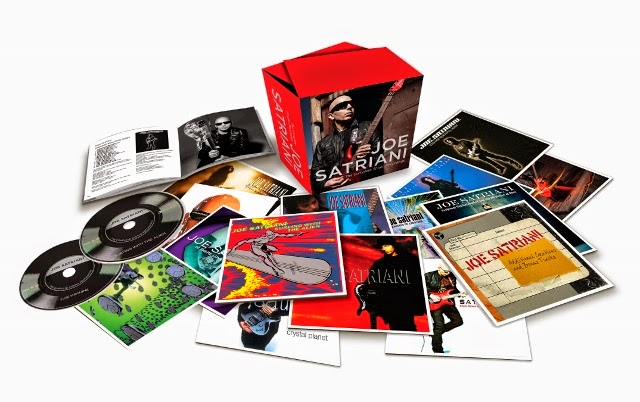 Joe Satriani: The Complete Studio Recordings is also available as a collectible limited edition USB drive exclusively on satriani.com.  The entire collection on the USB will be in 24-bit/96kHz "High-Resolution Audio". HRA offers Joe's audiophile fans higher resolution in bandwidth, wider dynamic range, greater detail, and more depth than a conventional CD. The HRA recordings are as close as a fan can get to both the early 1/2" analog masters and the later high sample rate digital masters. All albums have been re-mastered specifically for HRA delivery by John Cuniberti.

In addition, Satriani appears tonight on The Arsenio Hall Show where he will sit in with their award-winning band, and tomorrow, Joe will be the featured guest on Rockline (http://goo.gl/VhWtBv)

On the print side, Joe is featured today in the Life Section of USA Today (http://goo.gl/U0KOMb), on the current cover of Guitar World Magazine (http://goo.gl/V23agd) , and on April 5th,  Joe appeared on the Finale of VH1’s, That Metal Show (http://goo.gl/8S8r4P).

One of the most influential and respected instrumental rock guitarists to emerge in the past three decades, Joe Satriani is that rare "musician's musician" who's crossed over into the mainstream with music sublime and complex, appealing to a wide variety of tastes.

A true master of the six-string, Satriani worked as a guitar teacher in his early career, with a number of his students—among them Steve Vai, Kirk Hammett (Metallica), Larry LaLonde, David Bryson (Counting Crows), Charlie Hunter and more—achieving their own considerable successes.

While in considerable demand as a sideman throughout his career—he's toured with Mick Jagger, Deep Purple and many others—Satriani has pursued his own musical vision over the years through a series of instrumental rock albums (many of them Grammy nominated) which chronicle his evolution as an artist and his eloquence as a guitarist.

All 14 of Joe Satriani's landmark studio albums, from Not of This Earth (his 1986 debut) through  Unstoppable Momentum (2013's masterpiece), are included in the new collection alongside "Added Creations and Bonus Tracks," a newly-curated anthology disc of rare compositions and performances falling outside the purview of Satriani's official album canon, and Surfing with the Alien, 1987's platinum-selling breakout.

Joe Satriani: The Complete Studio Recordings presents brand-new digital masters, overseen by Joe Satriani, with each CD packaged in a replica cardboard jacket.  The library collection is housed in a specially designed clamshell box with a booklet filled with photos and memorabilia from across the decades.

Satriani is extending his decades-long relationship with Sony Music, recently signing a new multi-album deal with Legacy for future recordings.