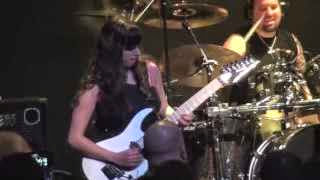 For me one of the best melodic instrumental albums ever made. In the top 4 of the the best shred albums ever made according to guitar world.  Difficult to believe this album is almost 30 years old.
http://web.archive.org/web/20110528005153/http://www.guitarworld.com/top_10_shred_albums

This selection of videos are from the continuing live tour of the Tony MacAlpine, featuring the exceptionally talented Nili Brosh... the only guitar player of recent times that made me blush.


The details about the album
Released 1986[1]
Recorded 1985 at Prairie Sun Recording Studios in Cotati, California

Edge of Insanity is the first studio album by guitarist Tony MacAlpine, released in 1986 through Shrapnel Records. In a 2009 article by Guitar World magazine, the album was ranked fourth on the all-time top ten list of shred albums.[3] In 2014, nearly thirty years after its release, MacAlpine announced that he will be performing the album in full during a series of shows in California and Baja California.[4]  http://en.wikipedia.org/wiki/Edge_of_Insanity