We can now tell you the album called "Strings 24"will be released on March 20th. Lorenzo Feliciati, Roberto Gualdi and Alex Del Vecchio all feature on the album. 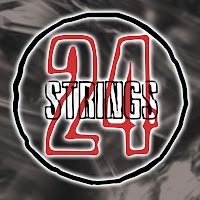 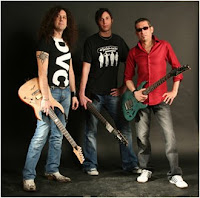 Strings 24 are a new project created by Frank Caruso, Stefano “Sebo” Xotta and Gianluca Ferro. These three axemen coming from different musical experiences decided to mix their styles into a new band dedicated to guitar, with the aim to raise its musical expression and compositional potential. The bands name comes from the three guitarist’s use of 8 string guitars (3x8=24).

The three musicians have a pedigree of being in the music business for many years. 24 Strings, their new project immediately gathered broad attention from Italian record labels, magazines, radio and TV networks along with attention of Lion Music. Their self titled debut album is unashamedly full of virtuoso rock guitar across 12 identifiable tracks and will appeal to fans of Vai and Satriani as well as those into newer guitar virtuosos such as Rusty Cooley and Marco Sfogli.

The three guitarists of Strings 24 have identifiable styles. Sebo is a typical rock player, very pentatonic oriented with a passionate vibrato coming from the Gary Moore, Zakk Wylde, Marty Friedman school of thought. Frank is a perfect blend of Ritchie Blackmore and Yngwie Malmsteen, very precise with solos and really powerful with riffs! Gian’s style is best defined as “liquid”, because his arpeggios and licks are really like water coming out from a bottle. Very prog metal influenced, Gian’s composition style is really complicated, but in a very musical way. These three variations on rock guitar are important in bringing a different style and touch to the songs, creating the unique Strings24 style.

The trio began writing songs for the album at the end of 2007 before selecting the material to feature on the album in the summer of 2008. Each of the three guitarists have home studios, so they started composing and sharing the projects, adding new parts in the different studios and putting them together. All the drum parts were initially done drum software, before the real drums of Roberto Gualdi (Glenn Hughes) were tracked at Damage Inc. Studio in Ventimiglia. IT. Roberto’s drum work added a lot of dynamics and musical ideas, giving the album a new punch. Finally the album was mixed at Fran Caruso’s Phantom Studio, and the mastering was shared with Luca Pilla, a very talented Italian sound engineer.