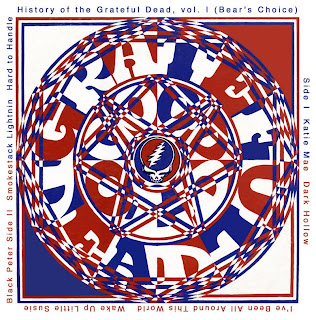 History of the Grateful Dead Vol. 1 (Bear's Choice), the Band's

When the Grateful Dead left Warner Bros. to form their own label in 1973, after six years and eight albums, they delivered their first live "best-of" anthology, HISTORY OF THE GRATEFUL DEAD VOL. 1 (BEAR'S CHOICE). The album, which will be reissued by Audio Fidelity on July 10 on 180-gram virgin vinyl, documents the band's February 13-14, 1970 stand at New York's Fillmore East as recorded by Dead sound manager (and creator of 'Owsley' LSD) Owsley "Bear" Stanley. According to Audio Fidelity President Marshall Blonstein, the new release will be issued in a numbered, limited edition and will be available at both online and brick-and-mortar retail stores.

Like the famed San Francisco band itself, HISTORY OF THE DEAD is unconventional: a 'greatest hits' compilation that's also a live album (the group's fourth). It is also regarded as a memorial album-to Ron "Pigpen" McKiernan, the group's original organist, harmonica player and co-lead vocalist who died just four months before it was released. Not only does Pigpen kick off the album's all-acoustic first side-with a strong reading of Lightnin' Hopkins' salacious blues "Katie Mae"-he also commands Side 2, his vocals driving the full band through the Otis Redding hit "Hard to Handle" and an epic version of Howlin' Wolf's "Smokestack Lightning." The latter two songs were longtime Pigpen features-and fan favorites-of early Dead concerts, with "Hard to Handle" showing up almost 100 times on Dead set lists from 1969 to 1971.

The remainder of the acoustic portion of the album features Jerry Garcia and Bob Weir. The pair follows Pigpen's "Katie Mae" with a version of the oft-covered country/ bluegrass tune "Dark Hollow" and a good-natured take on "Wake Up Little Susie," the Everly Brothers' chart-topper from 1957. Garcia handles both the traditional folk tune "I've Been All Around This World" and the seven-minute "Black Peter." The latter, a Dead standard that was featured in more than 350 of their shows, had first appeared on their 1970 album Workingman's Dead.

HISTORY OF THE DEAD captures the Grateful Dead at what, in hindsight, proved to be a pivotal period in their career. It was the last record to feature the group's 'original' lineup-Jerry Garcia, Pigpen, Bob Weir, Phil Lesh, Bill Kreutzmann and Mickey Hart (who joined in 1967)-and the first to fully document the Dead that most later music fans came to know: still capable of dazzling instrumental improvisation, but also dipping deeply into the well of more intimate, traditional folk and blues material. Originally intended as the first in a series of best-of sets taken from Bear's "audio journals," the album reached No. 60 on Billboard's LP chart.

Unlike Audio Fidelity's recent Dead reissues, SHAKEDOWN STREET and BLUES FOR ALLAH, HISTORY OF THE GRATEFUL DEAD VOL. 1 (BEAR'S CHOICE)will be issued as a single-sleeve LP. When the label proposed a gatefold package, the band members asked that the original artwork be kept intact exactly as Bear had prepared the original release to honor him. Bear passed away last year.


Founded in 2002 by Marshall Blonstein, Audio Fidelity specializes in deluxe reissues of classic popular-music recordings for the audiophile and collector markets. The Camarillo, California-based label is best known for its 24-karat Gold CDs and its virgin-vinyl album editions, though it also releases DVD titles. In 2011, Audio Fidelity launched the Target Series of CD and LP reissues as a means of broadening its audience beyond its loyal audiophile base.

Audio Fidelity emerged out of the pioneering DCC Compact Classics label that Blonstein started in 1986, following stints as president of Island Records and co-founder of Ode Records (where he helped make Carole King's Tapestry one of the best-selling albums of all time and built the cult-film franchises The Rocky Horror Picture Show and Cheech & Chong's Up in Smoke).
http://www.audiofidelity.net/