Some of the best guitarists in the country will be present in two nights to mark the history of the city of Niterói. Must, be sure your ticket NOW!

MOZART MELLO - One of the largest, if not the greatest guitar taught in Brazil. Considered by many the "Master Teacher", as students have had artists like Kiko Loureiro , among many others.Launched a number of methods, handouts, books and video lessons, and has worked (recorded and / or monitored and / or participated) in events with Dry and Wet, Andrew Christovan, Heraldo do Monte, Vitor Biglione, Pixinga, Nico Assumption Tomatti, Nelson Farias, Gregg Bissonette (workshop) , among others. More info: http://www.mozartmello.com.br

FAÍSKA - is one of the most respected guitarists in Brazil, with three solo instrumental albums, seven video lessons and a songbook (released by Guitar Player). In addition to a solid solo career, he built his career accompanying artists in Brazilian music, like Eduardo Araújo, Fagner, Ney, Wanessa Camargo, Fabio Jr, Rita Lee , opened the show by guitarist Frank Gambale , drummer with the workshop did Carminie Appice and shared the stage with the British band Deep Purple .Has been elected by the magazine Bizz and Guitar Player as one of the ten best guitarists in the country More info: http://www.faiska.com.br

ALEX MARTINHO - He graduated with "honors" by the GIT (USA) in 1992, and has a solo career as a guitar instrumental rock which has five CDs and a DVD (some in partnership with Oak Sydnei ) as well as participation in various collections guitar. Holds workshops and concerts with his band throughout Brazil and has worked with magazines like Guitar Player, Guitar Cover (where he had a monthly column about guitar-rock for ten years) and Music and Technology . More info:http://www.alexmartinho.com.br

GUSTAVO DI PADUA - Considered one of the great revelations of the guitar today, in 2008 participated in the contest "Guitar Idol" made ​​in England, where they competed with more than thousand of guitarists around the world and ranked among the top 10. Today, Gustavo has an extensive musical background, is part of important bands and accompanies various artists. It is the band's guitarist Almah , known internationally. More info:http://www.myspace.com/gustavodipadua

FRANK SOLARI - Considered one of the largest Brazilian guitar virtuosos. Instrumentalist, composer, performer, producer and arranger, has released three solo instrumental albums, two video lessons (which demonstrates the techniques applied to the phrasing of the guitar) and participated in numerous recordings and projects as a special guest, with emphasis on partnership with Eduardo Ardanuy and Sergio Buss at Tritone (98). In recent years presented several concerts and workshops at national and international scene. More info:http://www.franksolari.net


Rafael Bittencourt - is guitarist, composer and founder of the famous Brazilian band Angra , with the marking of more than one million copies sold worldwide. For several years he was voted among the best rock guitarists and songwriters in the specialized media of Brazil and Japan was a columnist in several magazines and teaches guitar workshops in Brazil where he expounds on his style of composing and playing the guitar, how to manage a group of successful experience in studios and live shows, harmony, structure, perception and much more. More info:http://www.rafaelbittencourt.com


In addition to playing live music several of his CDs, the artists will speak about issues related to their successful careers and about guitar in general.

Lots of music at the highest level will roll, do not miss! Rare chance to see all these guitar heros closely.

(Available only in Modern Music School) .

Ensure your ticket in advance now! They are only 300 places available at the event.

(If you can not attend in person at the school, you can purchase tickets via bank deposit - contact us and ask better)

Festival Details: http://www.musicamoderna.com.br/index.php/A-Escola/Eventos/Guitar-Player-Festival-2012-em-Niteroi-RJ.html
For more information about the venue : www.amf.org.br 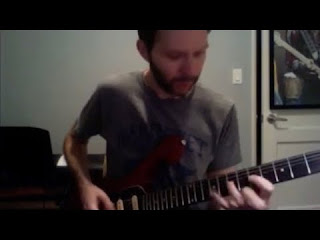