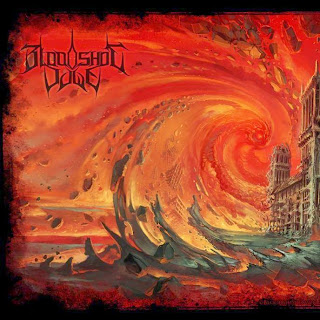 UK melodic extreme metallers Bloodshot Dawn have announced some of the guests that are set to appear on their second album which is set to be recorded this summer. Sven De Caluwé from Belgian death metal band Aborted will be weighing in with vocals, Swedish guitar maestro Per Nilsson of Scar Symmetry and Wintersun’s Teemu Mäntysaari will also be adding pieces to the forthcoming album.

The band announced recently that album number two would be a crowd-funded project that will launch on 16th April. Bloodshot Dawn have since then started releasing a series of videos on the build up to the launch offering sneak previews of the new album content including artwork, music, etc.
Welcome to Episode 2 in this series of updates leading to the Kickstarter campaign for our 2nd album! It is now official that we WILL be hosting a Kickstarter to raise funds for the album, and it will launch on April 16th 2014. We have decided on this financial route as we feel that with your help we can create an album that is really special, in all aspects!

This episode gives you a look at some of the material Josh has been writing for the 2nd album, as well as the first glimpse at the new album's artwork, currently being made by Par Olofsson.

As always, thank you so much for your support! See you next week for Episode 3!! \m/


Preparing for album 2 - Episode 1: Kickstarter plans (and the new drummer!)