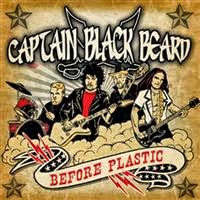 Captain Black Beard just released their first video/song from their coming album. The track is called "Somebody".

On the 23rd of May the band is releasing their sophomore album "Before Plastic" on Dead End Exit Records (a division of Roasting House) and Sound Pollution Distribution. The album contains 11 melodic kick ass-rock tracks and also features guest appearances by Bruce Kulick (KISS, Grand Funk Railroad) and Mats Karlsson (220 Volt, The Summit).

Check out the video for "Somebody" here:

Quotes:
"Ill-mannered and charming hitseeking rock like it was made by KISS, Billy Idol and Pat Benatar - together and in their prime."
SWEDEN ROCK MAGAZINE (rating 8/10)

"Captain Black Beard have guts and glory written all over them. Their melodic vocals and guitars, make them stand out above the rest in the genre of AOR Rock".
BRUCE KULICK (KISS, Union, Grand Funk Railroad)