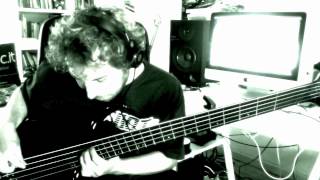 "Three Wise Monkeys" - that's the name of the third album by progressive rock composer and bass player Alberto Rigoni (TwinSpirits) that will be released worldwide on October 1st 2012.

The album will be distributed in USA and Canada by Nightmare Records, in Japan by Disk Union, in Europe by Power Prog, in Russia by Media Star and in Italy by BTF.

More info about the album (complete special guest list, track list, video trailer) will be revealed in the next weeks.