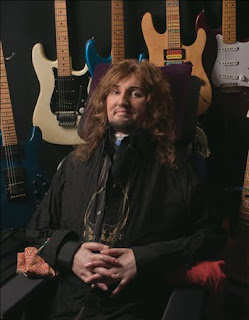 I believe it was 1986 when Jason first sent me a demo tape. It was made on a 4-track cassette and showed even then that he was developing his own voice. That early demo, as rough as it was, showed promise for what Jason could be, and with Perpetual Burn he more than fulfilled that promise. He was growing every month in his playing, and Marty Friedman was a catalyst that helped Jason progress even faster. Between the time he recorded those demos at age 16 and Perpetual Burn a year later, quite a metamorphosis took place.

I think had Jason not gotten ill, he would have made a few more records that would have put him at the top of the guitar instrumentalist field, but ultimately he would have become somewhat bored with shredding and focused more on his abilities as a composer and orchestrator.

Full in depth interview with the giant of guitar http://www.guitarplayer.com/article/jason-becker-super-hero/148973
Jason Becker