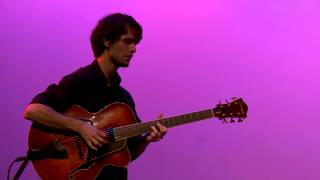 Sterling performed this piece in the final round of Lee Ritenour's international guitar competition "Six String Theory." It landed him into the last tier of the finals, and an eventual 2nd place finish. Sit back and enjoy a beautiful, original composition by this young man from New York.

*GUITAR GREATS is a weekly web-series featuring live, uncut performances from the Crown of the Continent Guitar Festival (COCGF). The COCGF brings together some of the worlds most talented guitarists for a week of workshops, concerts, and musical creativity in Big Fork, Montana. New episodes of Guitar Greats will be released every Tuesday and Thursday leading up to, and during, this years festival running from August 26th-September 2, 2012.