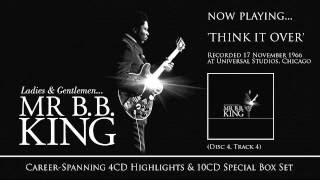 For more than half a century, Riley B. King – better known as B.B. King – has defined the blues for a worldwide audience. Since he started recording in the 1940s, he has released over fifty albums, many of them classics. He was born September 16, 1925, on a plantation in Itta Bena, Mississippi, near Indianola.

B.B.King has one of the world’s most identifiable guitar styles, his economy, his every-note-counts phrasing, has been a model for thousands of players, from Jimi Hendrix, Keith Richards, Ronnie Woods, The Edge, Eric Clapton, Peter Green, Jimmy Page, Slash and George Harrison to Jeff Beck.

Even well into his 80’s B.B.King continues to tour extensively, averaging over 250 concerts per year around the world. This year as well as touring extensively in the US he will be playing in the Lebanon, France, Belgium, Italy, Switzerland, Germany and Brazil.

This multi-format career retrospective is being released to celebrate his 50th Anniversary signing to ABC-Paramount Records in 1962. Leading the way with a 10 CD, 194 track collection chronicling his entire career from his first recordings in 1949 through to his most recent studio album. Housed in a beautiful deluxe box including a 72 page silver gilded hardback book, featuring essays from Ashley Kahn and Dick Shurman. Also packed with glorious images and memorabilia, illustrating this incredible career. All lovingly assembled and engineered by the Grammy Award winning Bill Levenson and Andy Mckaie.

By ‘pre-ordering’ or pledging, you will jump the queue and get your copy before anybody else. As the campaign progresses, you will also be able to choose from a growing range of items and some amazing extras.

By pledging, you will also gain access to a special Pledgers-only Updates Page where we will post exclusive content, news and updates to keep you both informed and entertained!

And as if all this weren’t enough, whether you choose the 10 CD Boxed Set or the 4CD cut down version every Pledger will be entitled to a very special download of the album “Lucille Talks Back” from the King of the Blues, B.B. King. 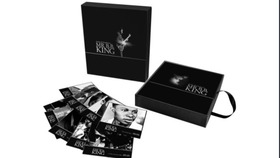 Please note this is a Global offer, available to everybody everywhere.

I would like to thank all my fans wherever you are in the world. This box set contains music that I’ve played over the course of 60 years.

Enjoy the music and I hope you come out to see me at a concert when I’m playing in your area.

PledgeMusic: BB King - Think It Over