This time last week, we launched the first of two Feodor Dosumov jam track packages and it has been received with open arms. After all, Feodor is one of the most exciting guitar players on the scene right now. His new jam track package, entitled 'Power Surge' (Alternate Version) has a cool story behind it too. A few months back, we sent one of our jam tracks to a load of artists from the JTC roster to jam over and send back. The track was called Power Surge. The guys (and you will have to wait and see who!) have all returned their versions now and we are piecing it together to make an amazing collaboration track. However, when we were sent back Feodor's first version, he had completely reconstructed the track, adding new sections and making it much longer in the process. So here it is in all its glory. In the meantime, Feodor also created a version over the original track too, which you will see in the near future.
Power Surge (Alternate Version) showcases exactly what Feodor is all about. Incredible guitar playing mixed with a creative backdrop to jam over. With this jam track package you will learn some incredible new techniques and licks that will test your playing to the absolute max. Available for just £4.99 this download comes with the full length video, solo track, backing track and complete TAB and notation. 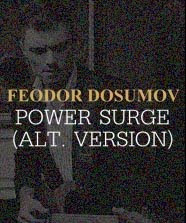