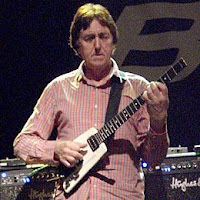 Though he is known for his legato and sweep picking techniques, rarely did more than a few minutes pass before Holdsworth switched from his pick to his fingers, and even to both, for his right-hand attack. The versatility displayed in Holdsworth's right hand provided both tonal and melodic contrast to his lines and chord phrases. The hybrid (pick and fingers) technique was especially effective as it allowed him to perform string skips and oddly-fingered arpeggios that bridged the gap between his single-line and chord playing during solo sections. As well, Holdsworth was constantly changing the effects and tone on his guitar to provide yet another level of contrast in his playing. He switched among clean, chorused and distorted tones between songs, and between sections of the tunes themselves. Holdsworth's attention to tone and tonal colors has helped make his sound one of the most recognizable in the realm of modern jazz-fusion guitarists.