May 30, 2009
Dark Itachi from Petrucci forum attended the recent Steve Vai master class and provided this review on petrucci forum.

Hi guys, 2 days ago I participated to an exciting Masterclass, done by the great Steve Vai, that was included in his Alien Guitar Secrets Tour, and I thought of sharing with you. Steve talked Italian , reading from a paper, at least half of the time, and it was very funny with his American accent.
The Masterclass was not very much based on technical/theory side, but much more on the way of practicing, the best methods to reach goals while studying in order to become a better player, stuff like that, plus some nice stories told by Steve about his experiences with gear, situations etc...
Through the night he stopped talking and answering questions, put a backing track on his Macbook () and played Building The Church, and two other songs that I didn't know, and in the end he jammed with 6-7 people from the crowd.
This is a video done by me (excuse me for shaking hands and bad quality from the phone) from the first song he played.


Talking about gear:
on stage there were two Legacy II heads , two Boss Digital Delay pedals, one Boss Chorus, a Jemini, a Whammy Digitech, one tuner and a volume pedal. Pretty restricted gear, but with a GREAT tone.
Really, it was great, the video doesn't do justice to it.The only thing I noticed was that the tone sounded maybe a little bit too compressed to me.

At the end of the night, Steve had a picture + signing stuff+ talk session with EVERYONE in the place (which made me get out of there at about 2 AM xD), and he was a really cool guy.
I had a block notes and my JEM signed, and got a photo with him. 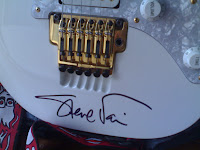