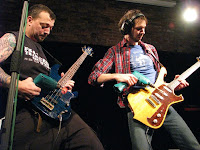 When I found out I was going to need to have two tunings for Paul’s tour, I quickly searched eBay to see if by some unbelievable stroke of luck I could find another one. (they are hard to find, not a very popular model and they were only made for a year or two). Lo and behold, I found one in excellent condition! Buy It Now price: $150.00 Woohoo! So I bought it and it didn’t get to my house before I left for L.A. for rehearsal. OH NO!! I had already bought the pickups for it but didn’t have time to cut out another pick guard. Well… it arrived later that day but I was at Paul’s already! So my wonderful and loving better half Kim overnighted it to Paul’s house.

I put the pickups in it on Paul’s kitchen table covered in towels. We didn’t have a drill (how’s that for irony) – they were at the rehearsal studio. So I had no choice but to use a screwdriver and slowly twist it back and forth until it went through. We found a screwdriver that was exactly the right size for the hole I needed to drill. It worked perfectly! Then Paul says “How can we make it easy for our tech to know which one is which”. Hhhhmmmmm… He then says “I know… put a sticker on each one with the tuning on it” Great idea!! So that’s what we did and there was never any confusion.